Today Prime Minister Kan requested that all the colleges across the country send up volunteer teams to assist in tsunami relief efforts, stating that there is not enough help and not enough being done to help.  The needs are still so huge.

Eric wrote this last night:  “Almost as quickly as the dreadful tsunami itself, the international media blitz covering it has come and gone and left in its wake a forgotten people stranded in hopelessness. For every tragic story aired during the news frenzy there are still thousands left untold. Entire populations are still struggling to find their way through the fog, so many dangerously close to the edge of despair. Who will rescue them? Now is the time for love to arise. Though the world, it seems, has moved on, the body of Christ continues to reach out to these hurting neighborhoods refusing to leave. The global church continues to bathe this beloved nation in prayers.  Never have so many been so close. Please ask our Father for multitudes to see and take the hand of salvation.”

Eric just talked for quite a while with our good friend Kentaro. He and his wife became good friends when we were living in Sendai; for several years he oversaw earthquake safety for the fire department in Sendai. He was transferred down to Tokyo several years ago, and then next month will return to Sendai. He spent some time at the fire department headquarters in Sendai and touched base with Eric several times when he was up there. Tonight Kentaro shared that many of the Sendai firemen have been suffering severe symptoms of post-traumatic stress disorder. They are the ones searching for and finding the bodies of children and family members; many without much rest. Eric hopes to stay in touch with Kentaro for continued cooperation and support. Pray for those who continue doing the most stressful of all jobs.
*******

Today Eric’s partner and friend Peter Thomson got eight paragraphs in the Japan Times as he shared what the guys did up in Sendai.  You can read the whole thing here, but here is the part of his interview that shares more about what they were doing.

Christian organizations were also quick to respond to the unprecedented disaster, with many groups working together to organize support.

Peter Thomson, an American missionary and a longtime resident of Hyogo Prefecture who cooperates with Christian relief organization Crash Japan, was part of one of the first response teams to head north to provide aid and support to survivors.

Crash Japan has set up six base camps, in Fukushima, Miyagi and Iwate prefectures, to house volunteers and dispatch them to areas in need of help.

Pastors of the many churches in the area call to inform them of what each community needs, and Crash Japan volunteers go on “shopping lifts,” scooping up goods from the group’s warehouse set up in Sendai and delivering them to the designated areas by van and truck.

“We try to ask them to be specific. They would say ‘we need baby goods,’ and we’ll say ‘OK, what age group and how many do you need?’ ” Thomson said.

In Minamisanriku, Miyagi Prefecture, the group’s volunteers got in touch with community leaders to seek information on those who opt not to live in the relatively well-stocked temporary shelters and instead try to remain in their homes, where delivery of food can be rare.

“If a team can find a local community leader, then the leader knows who is in the community. We had great success by connecting to local leaders and asking them ‘where do you want us to go?’ And they will take us to them.”

In addition to connecting with the locals, Thomson said it is important for those interested in volunteering to recognize their own capacity and limits.

“The need is so astounding and overwhelming, so realize that the one act of kindness, like carrying bottles of water for those too old to take them home themselves, those acts of kindness with a smile is huge encouragement,” he said. 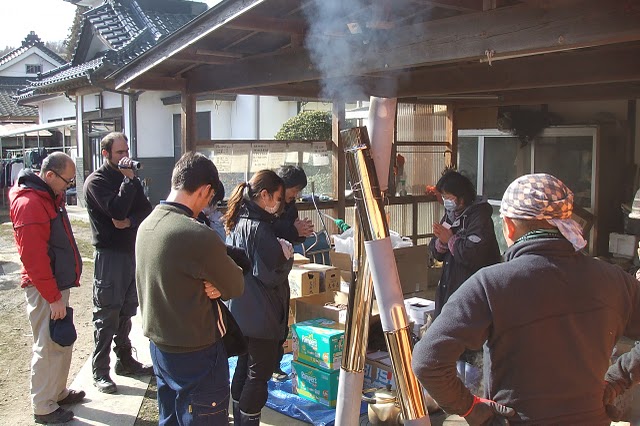 I have been thinking about these verses, and praying that God will show us how to do this for those who are suffering up in Tohoku:
“Happy are those whose help is the God of Jacob, whose hope is in the Lord their God, who made heaven and earth, the sea, and all that is in them; who keeps faith forever, who executes justice for the oppressed; who gives food for the hungry… sets the prisoners free;… opens the eyes of the blind,… lifts up those who are bowed down,…loves the righteous,….watches over the stranger; he upholds the orphan and the widow, but the way of the wicked he brings to ruin.” (Isaiah 146:5-10)