One of the areas of study that I focused on during my seven-year stint of doctoral work was that of rituals.  It fascinated me;  I think my personal interest helped me get through the thousands of pages of anthropological ramblings that otherwise would have driven me crazy.

This past week we expereinced two rituals in our local Japanese church that are often such an assumed part of the Christian experience that we don’t think much about it.  The first was Ian’s baby dedication.  In all honesty, as his mom I did not go through the dedication feeling particularly movedl.  (A number of reasons:  the baptisms that followed were clearly the “main” event as we wanted them to be;  we had tons of visitors and I was overly concerned with making sure they were fine, there were enough seats, the mike got set up finally, Olivia picking her nose as the pastor said amen, etc.  We’ve also been spoiled in that with our other 3 children several of our  family members from the U.S. were able to present for their dedications.) But I loved it that Eric shared clearly God’s work in Ian’s and our lives that led to our adopting him.  Many were touched and I think we all realized in this public ceremony that God has indeed called Ian to us and has set him aside for His special purposes.

The second event, the baptisms, were very moving for me.  In part it was because of our special relationship with both Naoko and George.  We understood what this meant in their lives;  what this meant for their families.  But also, I have been doing a great Bible study with Naoko and another friend, and our study on baptism led me to think more deeply about this rite of initiation.

Being a missionary in Japan for a lot of years has allowed me to work with a lot of different churches.  Baptism here is taken much more seriously, in my opinion, than in most churches in the U.S., and is given greater preeminence.  But it can also be a point of dissension between various denominations, as well as between missionaries and the church leadership.  There are many different views of the “proper way” to baptize.

One common belief among many churches is that a person is not saved until they are baptized — this is what “marks” them and qualifies them to really be a Christian.  We also worked for several years with a church that took a new believer through a very intense discipleship program, usually lasting 1 -2 years, before that person was considered ready to be baptized.  The church we have been working with the past five years tries to immediately baptize new believers.  This church sprinkles with water;  many churches have a baptismal or baptize believers in a body of water (If it were up to me everyone would be baptized in a lake or ocean!  But alas, we are in a church right now that sprinkles)….

But what does it all MEAN?  I’ve been reading and thinking the past few weeks about the significance.  The week before the baptism in the study I was leading we read the famous Great Commission, Matthew 28:16-20.  In Jesus’ commission to the disciples before He left, baptism was the second of three commandments he gave.  J.I. Packer says, “The root reason for the practice of baptizing is to please Jesus Christ our Lord.”  It was under Jesus’ authority, and because of his example, practice, and commandment, that the church began the practice of baptism.

But what I’ve been thinking about the most is what baptism initiates one into.  Initiation means reception or entrance into a committed membership.  In choosing baptism, one is choosing to yoke oneself to Jesus, but also it is a walking through the doorway into the corporate Church of God.  Michael Green says “Baptism is inescapably corporate.  It brings you into the Christ in whom others are engrafted.”

I think this is what I watched happen on Sunday.  And eighty others, including the family and friends of these two new believers.  As the pastor sprinkled their heads with water, we watched them choose to identify themselves with the mighty name of Jesus, as well as a very small minority in this country.  The ceremony itself was in fact rather dry, but at its completion something very moving occurred:   they stood up, faced the congregation, and they were welcomed into the Church as we all sang to them a wonderful Japanese song, “You were born to be loved.”  There is a version here you can watch on YouTube:

This is something the Japanese church does really well — welcoming in new members.  Both George and Naoko stood there shamelessly crying.  Naoko shared that she didn’t cry like this at her own wedding.  Everyone there knew that they had just somehow mysteriously been inducted into something greater than themselves;  they had been incorporated into the church of Christ.  (Below:  George receiving a gift from the church;  Naoko being welcomed by the oldest member of the congregation). 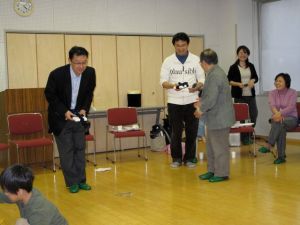 Our church is not all that we want it to be (who’s is?) and there is much more we are hoping will happen.  But this day of initiation reminded me that God IS at work transforming lives and calling people into a movement that is much greater than any individual or small institution.  In obeying the commands of Jesus, a new world has opened for Naoko and George and I know they, and this precious church who Jesus died for,  will never be the same again.