Eric and Annie should be in the last leg of their twelve-hour drive up to Ishinomaki.  I’m looking forward to getting the call that they have arrived safely!  The Huddlestons have had a full day of meetings, guests, and volunteers… I hope Eric will be able to help out for the next couple of days.

We just sent out our newsletter a few days ago – I will post the whole thing soon- but I wanted to post one of the articles that we wrote and include a neat update.

On our family’s “vision trip” to Ishinomaki in November, Eric took us to a famous attraction there – the historic ship San Juan Bautista, which remarkably suffered only little damage from the tsunami.

The existing ship is a replica of the Spanish-styled vessel that was built four hundred years ago by the Lord of Sendai; Date Masamune. During our last term in Sendai, we were intrigued by this legendary leader who, contrary to most other rulers throughout 17c. Japan, showed sympathy to Christians and allowed the gospel to be preached.

While most of Japan was extremely closed to foreign relations, Date modeled the opposite. He ordered the building of the San Juan Bautista in Ishinomaki, and sent an envoy of 180 to trade, establish diplomatic relationships with the Pope, and to bring back missionaries to Tohoku. Led by a Franciscan friar named Luis Sotelo, this voyage was the first ever from Japan to sail around the world. Some of the expedition members became Christians and ended up staying in Spain to escape the persecution of Christians which had begun back home.

Date wrote this in a letter to the Pope, “I’ll offer my land for a base of your missionary work.  Send us as many padres as possible.”

While still in Rome, word reached them of the seriousness of the persecution, and the Church determined it was too dangerous to send more missionaries at that time. Date’s wish was never fulfilled. Sotelo and the rest of the embassy eventually returned to Japan, where Christianity was being ruthlessly abolished. Sotelo himself was later burned at the stake for his faith.

Japan entered a long period of isolation from the rest of the world. Yet even after this nation reopened its doors to the West centuries later and Christianity once again was permitted to spread, the Tohoku region has remained very resistant.

God has been doing amazing things in the hearts of the people here as Christians from within Japan and from all over the world answer the call to come to the aid of this devastated region. We reflect on the four-hundred year old wish of a Japanese lord and the ship that stands as a symbol of his desire for this land to prosper. 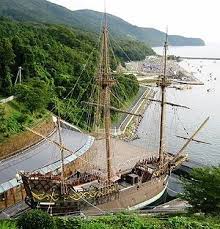 (Update part)
We first heard this story when our friend Chad shared the history at the Be One/Hope for Japan gathering several weeks ago.
Last Sunday, our friend George (Yoji) shared after church with us an amazing story.  He was on a business trip up in Tokyo, and was working with a younger businessman named Mr. Abe.  George asked him if by any chance he was from the Ishinomaki region, because about half of the city shares that last name!  As a matter of fact, he was.  George shared how he has gone up several times with Be One to help out, and Mr. Abe said, “Be One!  Everyone in Ishinomaki knows Be One!  They are helping everyone and lots of foreigners are in their group.  George, do you know why so many foreigners keep coming to Ishinomaki?”
George:  ” I know why now!  I just found out…”  And George proceeded to tell them the story of Date Masamune and his plea to the Church to send missionaries.  He said, “It’s happening now!  God is sending lots of foreigners and Christians to Ishinomaki now!”
Mr. Abe then pulled out his cell phone and showed him a picture of the ship he had taken… he knew the story and they talked about  how remarkable it is that four hundred years later, this plea is coming true.
We are excited about what God has planned to bring hope and a future to the people of Tohoku.
Advertisement