I have received periodic short phone calls from Eric. One thing I’ve realized is that they need a lot of prayer for patience and flexibility. There are so many unknown variables; their schedules change frequently. Because the 90 tons of supplies coming in from Samaritan’s Purse was coming in later than planned, the guys took some of the supplies that they had brought up to our Sendai Church (Sendai L’Abri Bible Church) and visited several other locations. Eric said he was greeted by shrieks of joy as the members of our church came outside and saw Eric. What a great reunion! He called me shortly after and his first words were, “You’re going to kill me! I didn’t take any pictures!” (He has instructions to go back soon!).

The tsunami water came up to the elementary school near the church where Eric used to play soccer with the boys – just about two blocks away from the church. Unbelievable.

I just got a phone call from our friend Kazue. She has been unable to go to the church too much because of the shortage of gas and transportation woes. But she was thrilled – the team had left 3 month diapers (diapers were the most requested need at that church) – and they are the perfect fit for her 2 month old granddaughter. They have not had diapers for her. She just emailed me this darling photo. We thank God over and over that they were able to get out of their house before the tsunami washed it away. 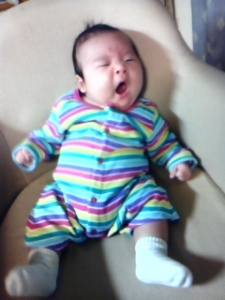 She shared a little bit about plans to rebuild their lives. They will move into a new apartment sometime soon, and buy plastic furniture because they have no money at this point. They have been given clothes to get them by for now. Kazue said she is just wearing borrowed sweats every day, but she doesn’t need anything dressier yet. I hope that we can personally help their family get re-started down the road. She said they haven’t decided if they would rebuild and move back to the same neighborhood. I can imagine the concerns….
In addition to gas and diapers, she said medicine and masks cannot be found anywhere (Japanese use masks to prevent spreading illness much more than North Americans).

Later in the afternoon Eric called us from the location where they were waiting for the trucks to roll in with the supplies that had been flown into Sendai to give out. He said it was incredibly cold while they were waiting, but the goods eventually came and they were able to unload them and then reload their own car to distribute tomorrow.

At this point, the guys will stay up in the Sendai region for the next two weeks. They are realizing how difficult it is to find the pockets of people who are still desperately in need of supplies. Please pray that tomorrow they will find the people in great need. We just heard about five senior citizens who frozen to death a night or so ago because they didn’t have blankets nor heaters. On the positive side, some of the team with Eric were part of finding the grandmother and grandson who had been stranded in their second-story home and were found still alive. Praise the Lord for this. Pray that they can find the people who still have great needs.

I am still in the midst of a pretty bad bout of flu. My fever hasn’t dropped – I hope by tomorrow I will have a better report. But I have been touched by our community who have brought over homemade bread, rice balls, stew, sushi, sandwiches… our kids have eaten great and I have not had to worry about cooking (which wouldn’t be happening). I have felt the Lord’s care for us in many ways. My sister Hannah flies in tomorrow afternoon – we are quite excited for that.

Lamentations 3: “The steadfast love of the Lord never ceases, His mercies never come to an end; they are new every morning, great is your faithfulness.”