We are finishing the drawn-out birthday celebrations of Owen tonight, when my family will come over for his birthday dinner.  It’s been fun while we’re in the U.S. to let the kids live up their birthdays with “real” birthday parties. In Japan, birthdays are much smaller-scale, and it doesn’t seem very common to have a birthday party where you invite friends, have a theme, etc.  So we always enjoy having our family friends over to celebrate birthdays while we’re there.

So Owen had his first friends birthday party, and, of course, it had to be Star Wars!  Four friends from school came, and four friends from our small community here, plus Annie and Olivia.  It was a fun theme to work with — we found foam light sabers at the dollar store, which made for lots of banter inside and out; made pretzel rod light sabers, and of course a Clone Wars cake was in order with glow sticks for the light sabers arising out. 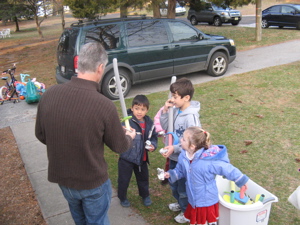 My own favorite gift that Owen got was the latest Mr. Potato Heads:  Darth Tater and Artoo-Potatoo.  These really are a must for Star Wars fans.  We were SO so glad that Owen wanted our friend Jeff to come to the party too – we were exhausted after the party and couldn’t have done it without him helping. 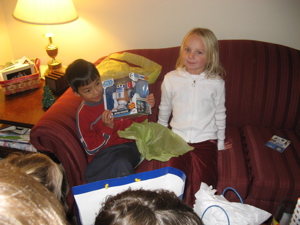 My favorite event with Owen’s birthday was the afternoon when I took him to Starbucks for kids hot cocoa (the best value on their menu – only $1.25!).  Every year on their birthday I tell the kids their “birthday story”.  This was a tradition I learned from my mom, and it’s been a natural way for our children to hear their adoption story and each year to understand more of it.  Usually I tell them at bedtime, but I wanted this year to make it feel more special for Owen, so Starbucks it was.

He mostly listened as I shared,  but he knew it was important.  He wanted to find a place to sit that was the most private, so i was glad when the front window chairs opened up and we could pull them together and talk.  I told him about the emergency surgery he had when he was born (because he was breach, the doctors didn’t know that his intestines had been growing outside of his body in his birth mother’s womb).  He heard again about the miracle of his recovery — he had absolutely no problems that were expected during recovery with digestion  and never needed any follow-up surgery as had been predicted.  His Japanese birth name – now middle name – Masaru means “victory”, and Owen means “young fighter.”  He and God together proved that – he was a victorious young fighter even as a baby.  When we received him as a one-month old baby, he really was the most beautiful baby I have ever seen.  How much we thank God for this little fighter who brings joy to us every day.

One thought on “My Jedi Fighter”