There have been a few people over my lifetime who, in particular, have gone out of their way to believe in me.  Doug Birdsall is one of those mentors.

I first worked with Doug when I came to Japan in 1990.  I was asked to be on a church planting team that was launching — a new thing for our mission at that time, with new leadership.  After months of meeting, praying, and planning, the plug was pulled on the project for a number of reasons.  Thorughout that year, I had a few chances to interact with Doug, and it became the start of a special friendship.

Doug over the years has been called to serve in some amazing capacities.  But even when traveling around the world to sixty or so countries as the leader of the Lausanne Movement, he didn’t forget his old friends while he was making many amazing new ones.  Such a gift!  And he would drop my name for some totally ridiculous positions and convince me that he wasn’t just being nice.  (I think he was!)

It was such a great treat to have the last 24 hours to again sit under his tutelage and renew my friendship with a remarkably godly man. (Photo below:  having coffee with Doug and Elliott Snuggs, another man I admire greatly) 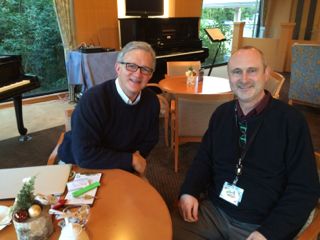 I think what makes Doug – and others who command attention like him – so unusual is how they have responded in the face of adversity.  Doug and his wife Jeanie have undergone some huge challenges.  I have learned much by watching close and afar how they have chosen to respond to God in the midst.  I remember in the midst of one most difficult season that every morning the two of them would read Psalm 27 together  Every morning for a year.  The most recent two adversities have been huge and deep — discovery of cancer (we are all thankful that it was discovered so very early and prayerful for a continued good prognosis), and shortly after that being let go just six months after becoming president of one of the largest mission organizations in North America.

Today he shared with a room full of eager-to-learn Japanese pastors and a handful of North American missionaries some of his reflections on leadership renewal.  Besides my own desire to hear from Doug, I realized that God had me there for His purposes as well.  I have needed reminders and renewal in our work in Ishinomaki.  Here are a few snippets (in no particular order):

**One big area of responsibility for leaders is to articulate the vision…  Vision brings life.  People looking to us for something bigger than themselves. I’ve realized that in the day to day challenges of the Nozomi Project, I have not always been good at articulating the vision and helping our staff to recognize that we are part of something bigger than ourselves. It is so important!

**God typically imparts vision to a person He can trust.  Vision usually imparts large quantities of people.  Person to whom its entrusted is someone he can trust…  Be faithful to the  vision God has given you.  Busyness can obstruct the very thing we have set out to do.   I am convicted today that God entrusted me with a special vision for the Nozomi Project – I am so thankful that God has trusted me enough with these amazing women!   At times it is daunting;  I falter and forget the vision.  I need to keep the vision before us – both for the rest of our team and for myself as well.

**Need for perseverance;  opportunity to trust God at a new level.  What goes deepest in our heart goes widest to the world.   For me (Sue), there have been challenging days over the past year and three months!  And I know there will continue to be.  Sometimes we lose sight of why we are doing all of this.

Anyone who knows Doug knows of his favorite missionary hero.  He told this story again – I needed to hear it:  Adoniram Judson – pioneer in American missions.  Rejected from India – spent life in Burma.  First twenty years – performed many funerals before any baptisms.  Funerals for his own family and team.  Wife Ann died; bible translation work taken away- thought it was destroyed.  Not a fruitful ministry career. Went back after twenty years to report on his work.  Someone stood up and asked, “Now, Mr. Judson, what do you think about the future of the Gospel in Burma?” Judson’s answer –  The future is as bright as the promises of God.  God used hardships to strengthen the heart of a man/woman he can trust.

And my last summarized note from today:  ** Being Bible-centered Leader

The word of God is all we have.  Not meant to generate our own ideas- made guardians of eternal truths of God.  Our privilege to speak words of God to men and women that he has made. The impact of your life and ministry will be in direct correlation with the degree to which we have mastered the word of God.

Convicting words;  messages that I know God wanted me to hear today.  So thankful for His timing after some rough patches.

Last night as I was walking to the onsen with two friends after the evening meeting, I noticed a call had come through on my cell phone.  It was the daughter of one of our Nozomi staff.  Because of various challenges recently, I have been praying for her every single day.  She called me out of the blue;  I had a chance to pray with her over the phone.  I know she is part of the vision that God has given to us.  I am so convinced that God  wants to communicate his love to her and bring her hope! — and use us to do that.

This afternoon two of my colleagues went to the home of another Nozomi staff to pray because of various issues she has had.  God is at work – breaking open His plan for salvation and bringing hope to the hopeless.  Yes- the future is as bright as the promises of God.