It has been a full full week!  I came home from our trip with strep throat, which sort of zapped two days from me..  We have felt the Lord’s graciousness in continuing to answer our prayers for future guidance.  We will write more very soon about that – I promise! – but in the meantime here are a few random reflections/thoughts from our family’s trip up to Sendai/Ishinomaki.

1.  The Tohoku region is entering a new season of recovery with new needs.  Now that most people have been removed from the evacuation centers and placed into longer-term temporary shelters, there is a new sense of despair and despondency among some who now have to deal with realities of these new, compact apartments in which they are somewhat randomly placed, without their previous communities.  We heard last week of a middle-aged woman who committed suicide a week after moving into one of these with her husband;  she could no longer bear it.  After the Kobe earthquake, the greatest number of suicides occurred six months and later.

Here is our friend Kazue’s daughter standing with her baby boy near her new temporary home.  She is doing alright there, but after a (very short) tour of her little place it was obvious that she is right:  they are cold, you really can hear everything, and they would be quite small for the families of three, four and five members living in them.  It was encouraging to see Red Cross funds at work — most of the homes have new appliances all with the Red Cross sticker on them. 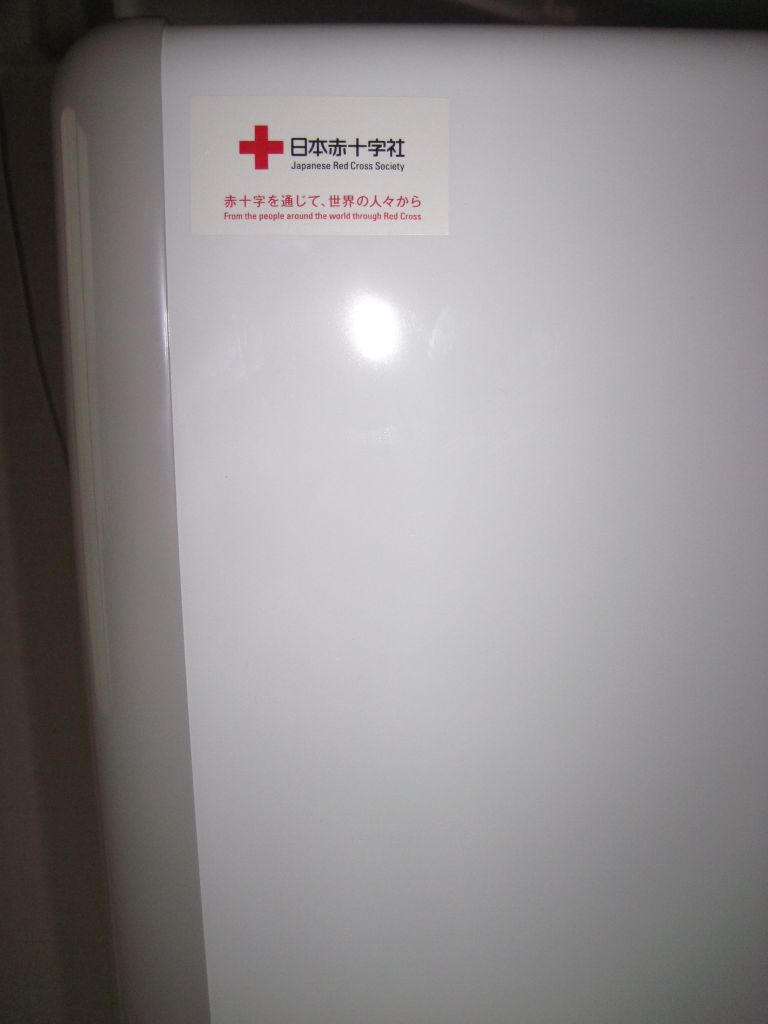 2.  Seven months later, the miles and miles of neighborhoods hit by the tsunami still look war-ravaged.  As we drove through many towns, it was still hard to believe… 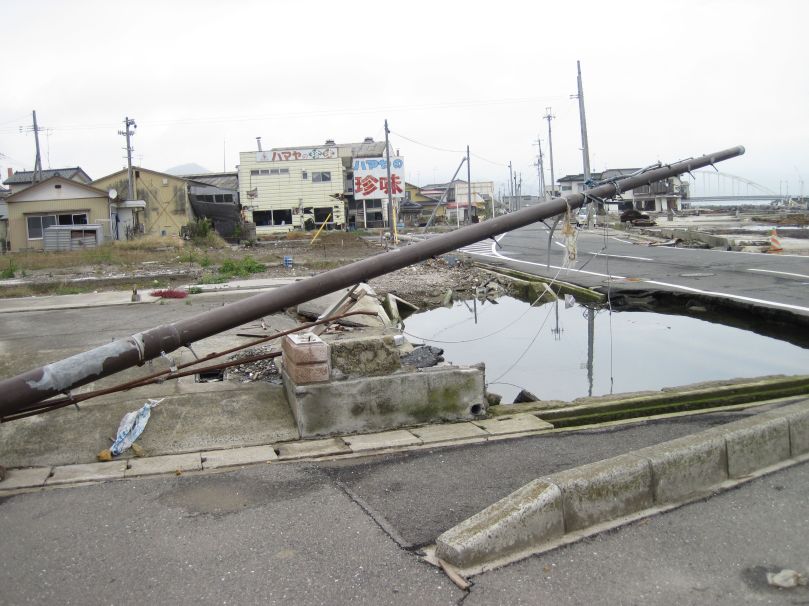 3.  The worst scene that we have witnessed that attested to the fierceness and strength of the tsunami was in a small town north of Ishinomaki called Onogawa.  Right along the coast, it was hard to see much left of the fishing town.  This four-story concrete apartment building was actually pushed completely over by the force of the wave.  The green on the right side is really the roof of the building.

4.  There are some really wonderful people in place who God is using to bring hope and recovery across Tohoku.  We had a chance to meet a number of these men and women while we were there.  It was great meeting with one of these, Matsuda Sensei, who pastors a growing church in northern Sendai.  He has done some remarkable things with his church, stemming from a remarkable vision.  It is clear that God has is using him for such a time as this.

4.  There are many things that I still don’t “get” about what happened on 3/11.  All of those why questions.  But I do believe that God was very present on that day.  On Monday, our family joined the other volunteers in offering to clean up the elementary school that had been housing hundreds of homeless people for the past seven months.  The previous week, they had all been required to leave, most of them going to the temporary apartments pictured above.  Here is Owen, taking apart some of the cardboard that had been used to separate sleeping areas. 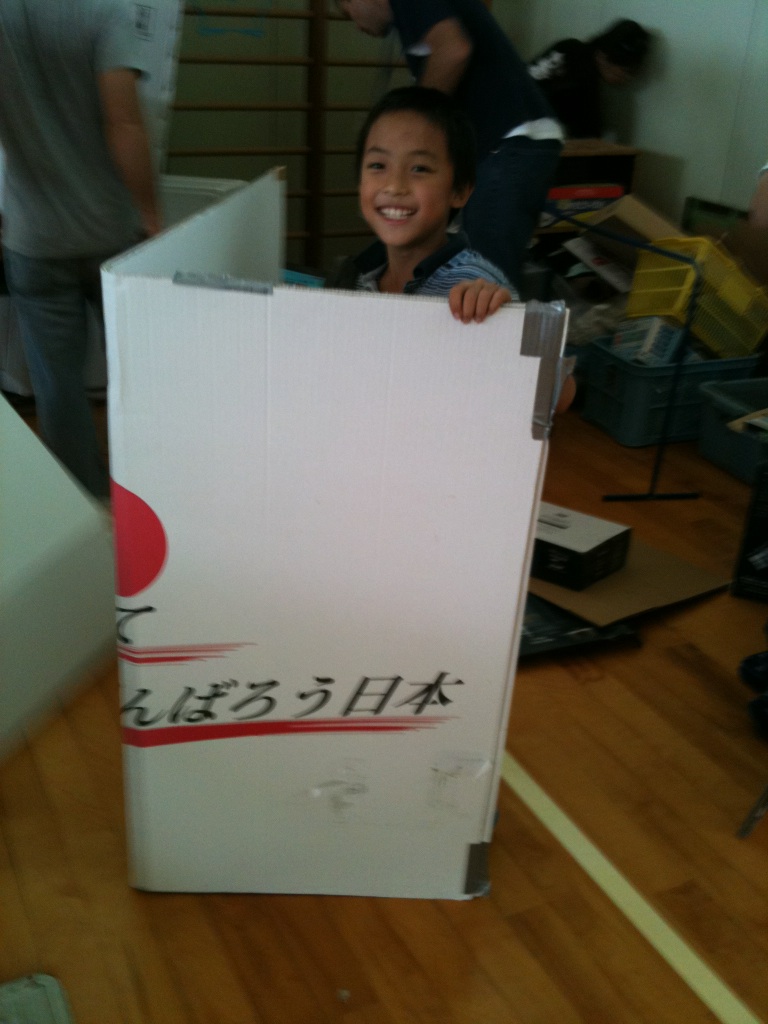 The main coordinator of the school throughout these months was Mr. Tak.  Back in May, he was wandering by an area where Be One was doing a barbecue, and came and sought out some of the leaders.  He wanted to know who they were… He said that many different volunteer groups had come through their evacuation center, but there was something different about this barbecue and the staff… and could they come and do a barbecue the next night?  This began a great relationship with Mr. Tak and Be One folks.  And through these relationships, he opened up and shared his story of the tsunami.  He was swept up by the tsunami and was sucked under the water.  “Suddenly, I felt like someone was pulling me out and rescuing me, bringing my head above the water.  It was God.  It was this God.”  And he pulled out a necklace underneath his shirt- with a cross pendant.  It was this God.  He knew Who saved him.  We pray that through developing friendships he will continue to grow closer to the One who saved his life and loves him dearly.

5.  God is at work still.  One of the highlights of our time in Ishinomaki was the informal worship service at the Be One house.  It was a wonderful mix of volunteers, Japanese and North American Be One members, and friends from the Ishinomaki community.  During part of the service, we had a commissioning time for the Huddleston family, who have at least temporarily moved up to Ishinomaki.

It was so touching to see Mr. T., one of the community leaders of the nearby apartment building, not only join in but also boldly and lovingly lay both hands on Chad and Jennifer during the prayer time.  There is something contagious about this hope, faith, and courage.   It is, we believe, more powerful than the strongest wave.

2 thoughts on “Reflections from our Recent Tohoku Visit”