Two weeks is up tomorrow!  Eric is planning to leave Sendai tomorrow and begin the trip back to us.  We don’t know if it will be a two-day trip or not;  I know our family will be waiting with open arms.  Olivia asks over and over throughout the day when Daddy is coming home.  Tonight, we called him during dinner.  Olivia told him what we were having – chicken, noodles, and corn.  Then she held the phone over her food and said, “Daddy, doesn’t this smell so delicious?”  Can’t wait till he really can smell the same food and we can be at the same table together!  I asked Eric what he wants to eat when he gets home and he said yakiniku (thin-sliced beef).  He said they have had a lot of sardines  (I know! I know!) and rice but not a lot of meat.  Here is a picture Peter posted on Facebook the other day – lunch on the road:

Their living conditions have been better than they expected.  They have stayed in sleeping bags on the floor of a seminary that has had electicity, heat, and hot water.

The other base camp in Sendai, an actual camp, still has no hot water, so the team members staying there have only used wipeys to clean up.

One of the other team-members with Eric and Peter yesterday sent us some photos from their time of doing English games and songs with the kids.  These photos made me happy. 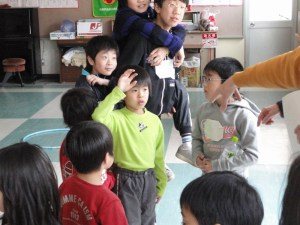 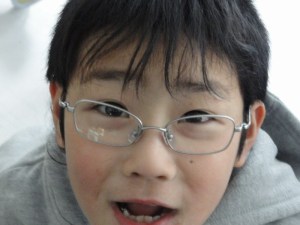 While they were at the evacuation center, the guys left some supplies for those living there.  The staff person said that they won’t be able to use the kitchen supplies for a long time – but Eric and Peter wanted to make sure that they had what they needed to get started.  They were thrilled. 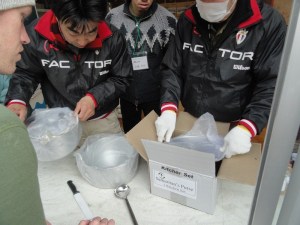 I just had a chance to see two-hundred some photos from Roger H.,  a missionary friend who was working along side of the guys for a few days.  It helped so much to picture where they have been the past two weeks.  I’m hoping to put together some of the photos into a slide show over the next day or so…

I was especially touched by photos of the pastors and the churches who have continued to do ministry;  who have stayed put;  who are ministering to their communities and welcoming in the missionaries who are coming in.  They are awesome.

I just read the following letter tonight…. it is written by an American businessman who lives in Tokyo.  It is not about patting missionaries on the back, but a praise to how God uses the body of Christ to do his work.  It is a wonderful tribute to what God does when he calls us to minister.  I think – who would ever want to run away?

The response to the earthquake by many of the westerners here in Japan has been to head straight to the airport and get out of the country.

The Christian missionaries here have done just the opposite; they collect relief supplies and go straight to the disaster area to help out.

It is truly amazing what they have accomplished.

They collect supplies through donations from local citizens and international aid associations.

Then they get trucks, road permits and take the supplies to the 400,000 people who have lost their homes to the earthquake, tsunami and evacuations from the exclusion zone around the nuclear reactors.

Churches in the affected region are often used as distribution points.

Some of these churches have been damaged by the earthquake, and some are even without electricity.

This has been a 24/7 job for many of my missionary friends, but I have not heard a complaint from even one of them.

Goldman Sachs has moved their offices from Tokyo to Osaka so that their employees will not be inconvenienced by the disruptions of the earthquake. 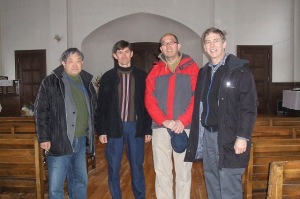 As missionaries have partnered with the Japanese church, God has been doing some really neat things in the midst of so much pain and suffering.  It amazes me what God can do!  A friend just shared this verse with me:  “God has made me fruitful in the land of my suffering” (Gen.41:52). I have begun to pray that God would make Japan fruitful in new ways in the midst of our suffering.  He has a way of doing that.  May the Church;  all of us Christians here – respond in such a way that God is able to bring new fruit out of the wreckage of this devastation.

2 thoughts on “Fruitful in the land of suffering”