A highlight of our year is always the Asian Access spring retreat, held in the mountains near Nagano.   We were gone for 5 days full of retreaty things:  some great times of worship; informal fellowship; learning and talking around the Word and values of Asian Access; and about a foot of snow fun for our children and about 14 snow monkeys who came out to play.

For our children, there was a great childcare team — part of them members of a worship band called Entourage from Huntington College, IN.  I’m not sure who entertained who more– our girls or the team:

We were also so thankful for our friend Julia who came from L.A. to help with the youngest ones… she and Ian bonded quickly.

One highlight for us was a baby shower for Ian and two other babies also born this past year.  Ian, Joshua and M. were both adopted by their families from the same organization.  All three of them were born within six months of each other with their own unique birth stories in different parts of Japan.  But as God would arrange things, all three precious boys were adopted by Asian Access families.

While we were fostering Ian, I felt like God had a special plan for these three baby boys.  As Ian went off to Okinawa, I was a little saddened as I knew these three most likely would no longer have contact.  But Ian came back to us, and it was a great joy to celebrate the three of them together in Karuizawa.

Our friend Anne in Virginia made watercolor name plaques for all three boys.  (She does great work — check it out at http://www.magentabyanne.com — I’ve taken the last name out of the photo below).

We played a shower game that was actually really fun (great job, Wendi and Emi! Joe and Kawasaki Sensei– I’m accepting bribes to NOT put video footage on this blog); shared their stories, and had a special prayer time for each of them. 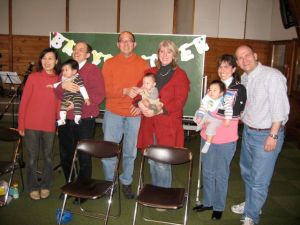 Getting the three little squiggling boys to somehow sit still for a photo was laughable.  Here’s a few of the many pictures (left to right: Ian, Joshua, M.):

I love the promise for adopted children of Psalm 27:10:  “If my father and mother forsake me, the Lord will take me up.”  These three boys have been taken up  by families who adore them…and by the Lord who I believe will take these boys and use them for His Kingdom purposes.