Owen started first grade.  This significant rite of passage has not gone unnoticed among our friends in Japan.  Many friends hav been checking in to see how his first few days have gone.  So far, so good.  His biggest complaint is — the long walk to and from school.  (About 12-15 minutes or so).  In Japan, once children start elementary school their parents are not allowed to drive them to school — they need to walk in pre-determined groups from their neighborhood.  His first two years of going to yochien he was ridden either on the back of my bike or, on rainy days, in the car, so this is an adjustment.

We were so thankful for Hajime, his group leader.  Hajime came with his mom a week or so before school started and introduced himself.  As the sixth grader, he’s been elected the group leader, and he has gone out of his way to help show Owen the ropes.  All across Japan there are these small groups of children who are assigned to walk to school together.

Perhaps the most common question asked to all soon-to-be first graders is:  “Did you get your landoseru (backpack) yet?  Perhaps the most important symbol of this rite of passage is the expensive leather backpack that the children are required to buy and tote on their backs to school.  Until a few years ago, all boys had black ones;  girls had red.  Recently, there has been a trend of expanding the color options… you’ll see Owen above wearing his marine blue one!

When we came back from the U.S. in February, our special friends, the Ish. family told us that since they are our children’s Japanese grandparents, they would like to buy the backpack for Owen.  We found out that it is the normal custom here for the grandparents to make the big purchase.  We were so touched!  And later discovered that this is about a $400 investment.  These are very special friends, indeed.  Here is a photo of the night that Owen received his special present:

Last Wednesday was the opening ceremony.  Mrs. Ish. and Yas. came down to take pictures and wish Owen well.

All the first graders wear – not uniforms — but blazers and shorts of some kind.  And what I have been discovering is that the moms at these opening ceremonies ALMOST ALL wear pastel colored suits.  I finally had to break down and buy one, too, knowing that I still have quite a few opening ceremonies to go here.  (Just for the record – it is a pink suit with shiny flecks in it- it will probably never see American soil, but works here for its purposes!) Here we are, off to the big event! 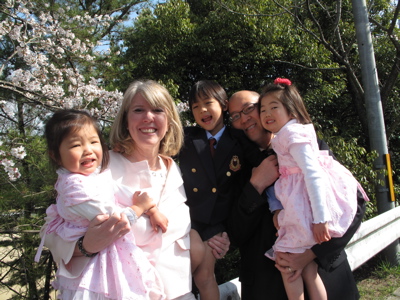 It was somewhat of a shock to go to the elementary school, see all the staff and teachers, compared to our last few years at the yochien (kindergarten).  The staff are mostly quite a bit older… and there is a more austere sense about the school.  But we were thankful that some of Owen’s good friends are in his class.  (Owen is about in dead center). 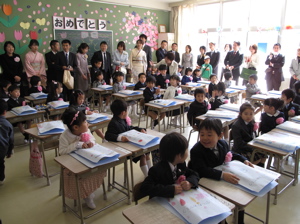 We were all a little sad that his special friend, Y., is in the other first grade class!

After the ceremony, our family had a fun time at the park celebrating with our friends the Thomsons.  Their second son also has just entered first grade in a neighboring elementary school.

Now, my Japanese language learning is all about elementary school vocabulary, and figuring out the myriad of paperwork that is coming my way each night.  With each new stage in our family’s life are new chances to learn, and many new relationships to foster.  It was exciting on Friday as a group of moms and i were all waiting at the park for our first graders to come home… and as I walked up two of the moms who I hadn’t met yet called me over and started chanting, “Please teach us English!”  They will be joining my Thursday housewive’s english class, and their children will participate in Eric’s kids classes.  Who knows what God has in store for us, and for them?

Please join us in continuing to pray for Owen and Annie (who just started her second year of kindergarten today)… as they make friends, continue learning Japanese, and adjusting to change.