(Read Part 1 below for full context) Shortly after we moved into Sanda four years ago, one of our neighbors, Mrs. I. came and introduced herself to us. She said that her daughter Y. had lived in the U.S. for seven years, and so many Americans had helped her daughter that she wanted to try and help us.

She came, of course, bearing gifts… a homemade rice dish. In a tupperware. And profusely apologized for being such a terrible cook. So I had fun the next few days thinking of what to put in it, and waiting a bit so it didn’t look too much like okaeshi. Unfortunately, okaeshi doesn’t stop there with one return–there are times where it can be more like ping pong….you don’t want to be the last one to receive a gift… Several days after that, she came down with some fresh produce that someone had given them that they “really couldn’t use.” A few days later, we accidentally made too many cupcakes and took the extras down. And then they received a shipment of apple juice from friends that they couldn’t drink… and so it began. Everytime she would show up at our door I would try so hard not to laugh. We would try and predict how many days it would be, and how many days we should wait. But the okaeshi dance continued.

And that dance was the beginning of an amazing friendship between our two families. Their daughter, Y., has become one of our dearest friends ever. She is at our home once or twice a week for a meal, movie, or just to hang out. And Mr. and Mrs. I. are very much our children’s grandparents in Japan. Our family birthday celebrations and holidays always include them; on grandparents’ day at Owen’s school Mrs. I rode Owen on the bike and made him feel like a million dollars. Mr. I has a special soft spot in his heart for our girls — and they love hanging out with him, and the 3 dogs and 4 cats at their home! We can’t tell you how much we love this family. 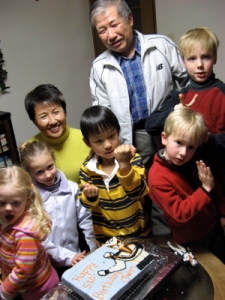 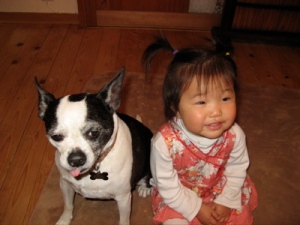 About six weeks ago, Mrs. I came over and said she had to talk to us. She told us they were moving to Osaka to be closer to her husband’s work. Eric and I were both reeling and couldn’t even believe it. We just couldn’t imagine Sanda life without Mr. and Mrs. I! I got all teary-eyed, but tried to be brave and supportive, and ask several questions, including when they might move. She replied quickly, “next week.” We were shocked… and then Eric and I looked at each other and said at the same time, “April Fools!”

Sure enough. She got us SO GOOD. Hook, line, sinker. She had us going, even to tears. She couldn’t stop laughing, overjoyed at getting this infamous practical joker. It was a great one, and I was quite proud of her prowess!

They wanted to have us and three of our American friends over for a last dinner before we leave. We had a great dinner, making takoyaki (fried octopus dough balls), eating sushi, noodles — you name it. There was a great deal of laughter and joy around the table. 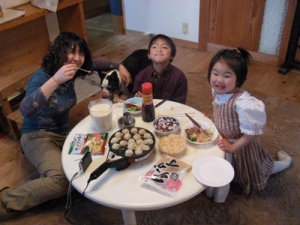 It happened to be Mother’s Day, and every year we get Mrs. I a gift on that day for the special role that she plays in our lives. After dinner, Owen presented her with a beautiful hydrangae plant that Eric had found: 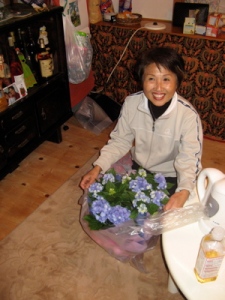 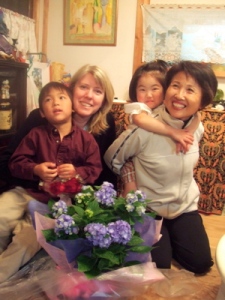 Then, it was time to give her the REAL gift. On a recent trip to Okinawa, we had bought a gift especially with Mrs. I. in mind. We had it ice-packed, and kept it refrigerated until this dinner party. Annie and Olivia gave it to her, and as she was opening it we told her this was a special gift to comfort them in their upcoming move to Osaka… 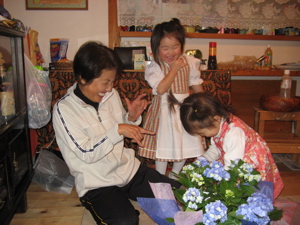 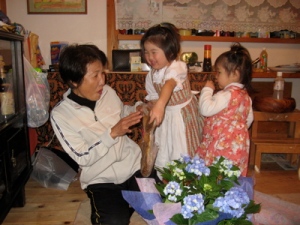 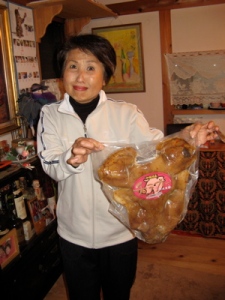 Just what she had always wanted! A real, very edible, soy sauce-and-pepper-flavored whole pig’s head. As you can see from those photos, it was her dream come true. Actually, if I can get download the video from our video camera, you will see her 5-second long scream…her throwing it down at Olivia’s feet, and then flying through the air… the shock of Annie and Olivia as they watched Mrs. I for the first time ever not know what to do with herself.

Needless to say, we couldn’t convince her to open up the vacuum-seal and nibble at the ears. But, we can say — April Fools okaeshi! !! While Mrs. I. has sworn not to mess with us anymore in terms of practical jokes, (which of course I don’t really believe, and already I’m trying to think of what special surprise we can bring them back from the U.S.!), I’m sure the gift-giving okaeshi will continue for a long time to come… but not nearly as long as I expect the give and take of our precious friendship with these dear friends to continue. Good things really can come from cultural obligations! 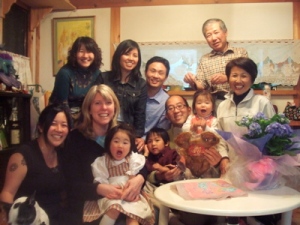 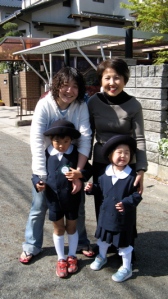 2 thoughts on “Gift-Giving in Japan (Part 2): Working the System”