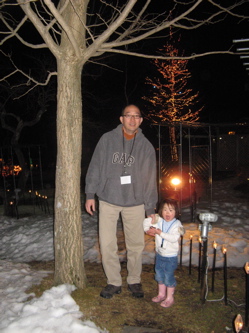 (For some reason I’m having problem with our blogging program for this entry- excuse the strange layout of the photos!)We just returned from a week in Snow Country!  We were up in the Nagano mountains in a fun little resort town called Karuizawa for our Asian Access annual conference.  While we never saw snow monkeys, which we see most years, there was some nice mounds of snow already there for the kids to play in and one snow day right before we left…

The highlight of the retreat, for me, was “family time.”  Family time meaning– this group of missionaries and Japanese staff are our family in Japan. We don’t get to be together very often, but when we are I feel so thankful for the beauty and diversity that God has brought to us.  In addition, our kids  had SUCH a fine time.  Coming home in the car yesterday (about 7 plus hours drive), Annie kept saying, “I want to go back to the ‘treat!”  They played, laughed; sang; ran around… and we had some fun family times, as well. Eric and I had been asked to plan a celebration dinner for Doug and Jeanie Birdsall, who have stepped down from their position as President of Asian Access in order to be Executive Chair of the Lausanne Movement.  It was really a neat privilege to plan – everyone who we asked to participate in one form or another did so with great enthusiasm because, truly, Doug and Jeanie are extraordinary people. Unfortunately, Olivia became ill during the beginning of the conference with a high fever and diarrhea.  And it just didn’t let up… she suddenly became really sick in the middle of the celebration dinner, causing us to make a quick decision that Eric would remain at the hotel dinner as MC, and I would take a taxi with Olivia to the Emergency room.  I was able to slip away with only a few people knowing, and was absolutely amazed that somehow I filled out all the (Japanese) paperwork at the hospital; Olivia was seen by the only doctor on duty in the hospital; we got some meds, and took a taxi back to the hotel in time for the last 30 minutes.  God was very gracious. She has continued having diarrhea, so today I took her to our local doctor where she received more medication.  But she is certainly perkier and much more back to her old self, although she seemed to have lost some of her pudgy cheeks this past week…A team came from Illinois to minister through worship and to provide childcare for our children.  Annie and Owen had such a great time in their classroom, and learned so much.  Our kids don’t get any kind of sunday school, so this one week is an important developmental time for them.  Here are some pictures of life, and family, happening in snow country (I actually didn’t take as many pictures as I would have liked because I was holding Olivia much of the time!) 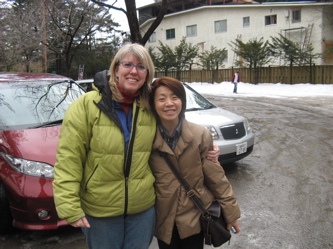 One of my favorite images is this photo, below: 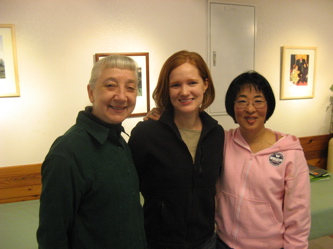 Stacia B., in the middle, is standing between the two women who first visited her in the hospital after her birth. Her parents had just arrived in Japan; Dee and Harriet came to welcome Stacia to the world. After 26 or so years, all three were in Karuizawa for this retreat. Although their paths do not cross too often now, there is such amazing history, and love, in these enduring mission friendships. As I look at the photos of our children being hugged and encouraged by other adult missionary friends, I am confident that in twenty-plus years our paths will continue to cross with these special friends who are having such a wonderful infuence on our children’s lives. 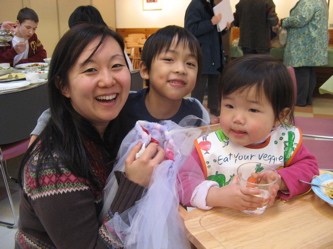