Despite having three children home with influenza all week, there have been some bright spots to our weekend.  Our new couch did come; I found a rug at Ikea that we both like a lot that was actually cheap, and Megumi has been here. (With special, special thanks to the B family  for the amazing gift to help us replace our couch and rug!)

We are loving our new sofa!  There are two leg rests that come out on either side, and there is a small table with drink holders that can fold down in the center.  Japanese do things right! 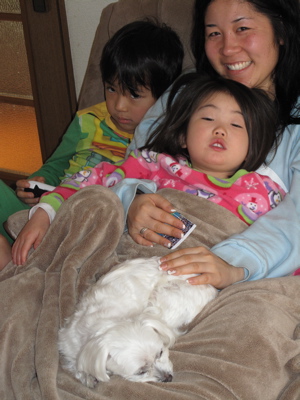 We were definitely entertained at the beginning and end of our day by Megumi.  She had a wedding today for a former Japanese co-worker.  She and Annie had fun doing make-up together.  (Today Megumi had to explain to Annie why, one in a while, it’s ok to break the less is more rule… like for a wedding.)

We were amused by her invitation to the wedding, that asked all the guests to come wearing red.  Megumi obligated the couple’s wishes, but upon arrival discovered that NO OTHER WOMEN attending wore any red!  A number of male guests were wearing red wristbands, but that was about it.  It wasn’t a joke, but most guests weren’t willing to stand out or already knew what they wanted to wear.  The good thing was — Megumi came home with a present for the best-dressed award.

The bad news was — this was the present (an over-dressed pig).