Yesterday was Owen’s sports festival at kindergarten. It’s a huge deal in Japan; it was so great to have my sister Beth and her husband Gene here for the event. They flew in the night before, and even though they were probably groggy they came to cheer and enjoy the festivities.
(Here they are at the airport, being greeted by Olivia who wore her favorite little green tutu):

It was a LONG and very hot morning, with all of us standing in the sun for about 3 hours. We were amazed at all these little kids learned and remembered…in addition to obstacle courses and races, each of the three grades did various group songs and dances. We were so proud of Owen, and it was fun to mingle with the families of his school friends as well.
Here’s Owen focusing on one of his events – it was an obstacle course/relay:

Here are a few photos from the morning:
Walking from our home to the kindergarten:

All the kids preparing for the opening exercises:

Owen with his buddies (he’s the one with his arms extended):

Eric was one of the parent helpers that day (actually, the only Dad helper- the rest were all moms. I was so proud of him):

Our little star getting to sit down in the shade for a break: 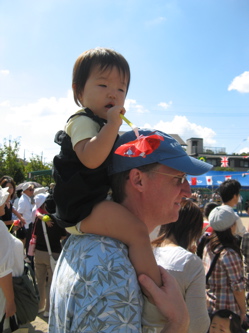 All of the future kindergarten students had a chance to shine as well, and receive pinwheel gifts:

Finally, you’ve all heard about women who drive to work and put mascara on in the car….well, my sister Beth topped that one. I made them hurry out of the house so we wouldn’t be late, and this was the scene as we were walking down our street to the school:

It’s been refreshing and great fun to have them with us. Our kids are loving the loving – thanks for coming, Beth and Gene!