Today we had our crockpot party -it was way fun. 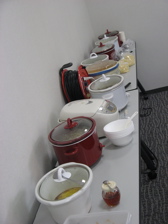 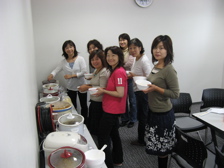 There were ten of us, who each brought a crockpot filled with a different dish. I had given them all recipes that either I have used and were passed on to me (thanks for some great ones!), and then each of these Japanese friends had taken the recipe, translated it into Japanese, and made the dish. They also brought along copies of each of their translated recipes. We spent about ten or fifteen minutes on each dish- everyone trying it, reading the recipe, talking about it. It was amazing how much laughter and enjoyment was shared around the table! 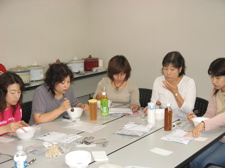 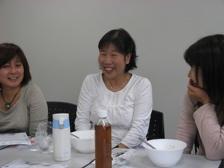 Some favorites: Meatballs with sweetened condensed milk as the secret ingredient; custard and apple crisp desserts made in the crockpot; Japanese nikujaga; Country Captain chicken; and hearty Italian soup.
One little tidbit I found out about life in Japan: in certain areas, the electric company drops electric prices by 2/3s from 11 pm to 6 am. So, three of these ladies are loving using their crockpot to cook their meals throughout the night, at a much lower cost. Never knew that before.

We are planning to do this again in January – next time I’ve assigned each friend to bring their own original recipe! That should be interesting. In the midst of what has proven to be a very intense week, it was nice to just enjoy being with a group of friends who are taking great joy in their new crockpot treasures.

(Don’t you think Rival should put our photo on their website or something??)