This morning our house church had a “surprise” birthday party for me (one day early). I sort of figured it out when it was our turn to host house church but they changed the venue without a reason. But it was still so touching as we walked in and one of the junior high girls put a homemade lei on me, and then one of the women pulled out a beautiful fruit birthday cake that she had made, and everyone joined in to sing Happy Birthday. I really felt loved. 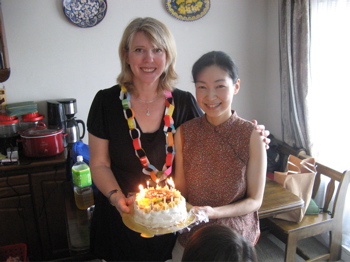 This was all really special. But there was something that made the celebration absolutely unforgettable. Today, during worship, our Japanese friend “George” prayed to enter the Christian life (read more about George in posts Learning and Loving and Transformers)!

We had broken up into small groups to discuss the Bible passage for the morning. Eric was teaching the kids in another room, two women’s groups, and then George and two Christian men from the group were meeting together. Suddenly Hiroshi announced what had happened…There was such a sense of peace in George’s heart and joy across his face. We all shouted and cried and rejoiced together.


Then his wife Aiko said, “we need to sing a worship song!” So we sang a simple, fun song from English camp, “Deep Down.” During the verse, we all sing, “Do you love your Jesus, deep down in your heart?” and then one person’s name is called to sing the next part: “Yes, I love my Jesus, deep down in my heart!” George’s name was called first and he sang it out. Then he called Eric’s name, following which George’s name was called again. Someone later apologized for him being called twice and he said, “I’ll sing it over and over — yes I love my Jesus!”

I read John 3:3-7 to George and the group… Jesus tells Nicodemus that he needs to be born again- its not enough to be born once. Today we celebrated my original birth into the world. That was nice. But there was such an amazing sense of rejoicing as we celebrated George’s re-birth, entering into the eternal Kingdom of God (Below: Aiko and Olivia, rejoicing).

George’s salvation is a wonderful reminder of the effectiveness of short-term mission teams. Last year, a mother-and daughter from our New Jersey team stayed with George and Aiko, and had a direct impact on Aiko’s becoming a Christian shortly after they left Japan. Last week, a father-and son team from California stayed with them, and really made a difference in George’s decision to follow Christ. Short-term teams: bring ’em on!

Tonight we found out about some close Japanese friends who are questioning our motives and vocations as missionaries here in Japan. It felt painful. And yet we are reminded that there will be opposition when God is at work. And He is –tonight, in a suburban home in Sanda, Japan, there is a new Christian couple praying together and putting God first. This is worth celebrating. Happy, happy birthday, George.