Eric and the rest of the Sanda team (except for Peter, who is staying until Sunday), came back late last night.  It has been good to have them home!  We had dinner and some “play time” with Yasko as well, so we’ve had a chance to hear stories and see some pictures from both of them. Some of her stories and photos are below.   I’m looking forward to hearing from George and Aiko on Sunday, as well, about their time up in Tohoku.

Here is the “Sanda team”, which also includes Yasko’s cousin and friend who live north of Tokyo: 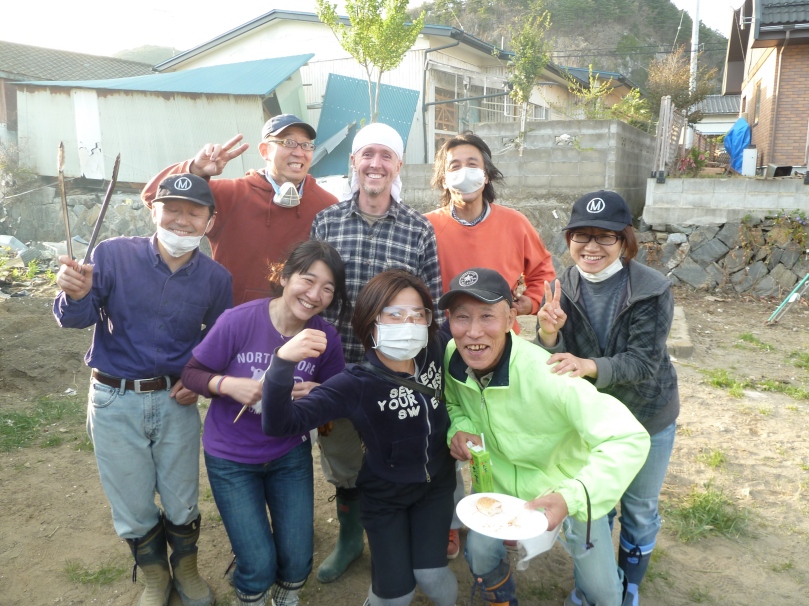 It sounds like everyone worked tirelessly all day long.  Yasko said her muscles were aching after the first day!  Tonight they were sharing at dinner (I actually made them stop!) – about the disgusting finds and smells that they found cleaning up.  There were boxes of month-old fish from a fish factory or store that was filled with maggots…. some could not handle the smells but Yasko was a trooper and helped with some of the worst of it!  They were thankful for masks that helped with odor-protection…Some of the volunteers and local women were helping and grossed out, so Yasko made a game out of it, giving out points for the fish that they would see – 500 points for red snapper!  Some of the residents were nervous in digging through the rubble for fear of finding a dead body…

One of the women who lived nearby was helping clean up.  She shared that she was nervous about cleaning up, but also nervous about the next day as she was going to the unemployment office for the first time.  She had worked for a fishing company in Ishinomaki- all of them had been destroyed in the tsunami so many people like herself had lost their jobs.  She said she only knows how to do fish!  One of the volunteers gathered some of the group together and asked if they could pray for her.  She was so thankful, and started crying.  She said up until now she has tried to be strong, but it felt good to share her fears and her tears with the team.  God is at work!

Here are some photos from Yasko, Eric, and Jennifer’s updates too.

The team went out and bought flowers and flower pots to help beautiful the park and public areas.

Team Sanda and a few others helped this lady dig the tsunami dirt out from under her home, and also help her with the floor.  A new floor had been laid by other workers, but it hadn’t been done right.  Eric said it was so great because George was assigned to go there, and his specialty is — flooring!  He was able to call a co-worker and find out just what was needed to help with her flooring.  They washed her pots and pans, that had been dirty from the tsunami, and also went in the back to shovel dirt.  Her back wall had been caved into the street by the tsunami, so the team helped remove all the dirt and fix the street.  She was so thrilled to see her alley way clean again like others finally!  She kept thinking, “Why me?  Why is my house this dirty and not others?”  She did not have anyone else to help her as she lived alone (her parents had been injured in the tsunami and are still in the hospital).  It was a great blessing that the team could help her do this.  Before this happened, she always believed that she shouldn’t ask for help but should do things herself.  She said the team taught her that she could ask for help. (George and Eric, pictured below)

At one point Yasko was helping passing out clothes to people lined up.  A sixth grade girl was looking for clothes, and Yasko asked her if she needed anything.  She stopped, looked at Yasko, and said, “I just need love.”  Yasko hugged her, and they cried.  Now she wishes she got her name and phone number.  But Yasko hopes to go back, and knows which apartment is hers, so it would be great if they could reconnect.
The pictures below are from the barbeques.

In the first area where they had spent three days cleaning up the park, they cooked under a wisteria overhang.  The wisteria tree had been killed in the tsunami, but the team made great use of the seating area. 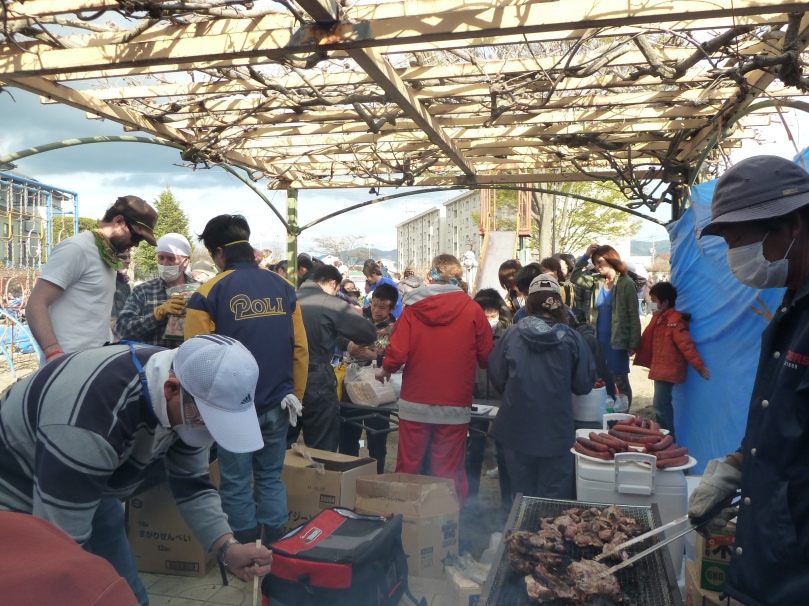 Here is Yasko serving hotdogs at the BBQ.  It was really wonderful to see the team work together to pull this off, and to see how the idea has grown!  Yasko said that there was almost a “carnival-like” atmosphere with joking and mingling and fun.
When they did the BBQ the second day in another location, a man was walking by who is a leader at a nearby evacuation center.   He stood back and watched for awhile, and then he came and asked who the group was.  He explained his position, and said that he has seen many groups come and bring things in and serve meals, but there was “something different” about this group.  He asked if there was any way the group could come and serve at his evacuation center.  So, the day that Eric and the others came back, the team still up went for a third day to do a barbeque at the evacuation center, and then tonight went to a different area where they were requested by an NGO.  Barbeques have been quite the hit this week!  What I have heard repeatedly is that there was laughter, sharing, and just “hanging out” time.  This is a treat for those who are still trying to pull their lives together.  And there was a special prayer time at the end.  Even though many residents had already gone back to their homes, they were all still watching….
Eric fell asleep around 9 pm tonight, so we will write more over the next day or two and post some of his pictures as well.  THANK YOU for caring and praying for us and for the team.  Please pray for those who are still up ministering;  for those who still need help, need food, need love, need Jesus.
Advertisement

2 thoughts on “Fears, Tears, and Cheers”