I just made the most yummy dinner ever.  It was simple and SOOO delicious- my whole family loved it.  I am hoping that my teammates will be willing to have us try and make this sunday for church lunch – for sixty people!  (I’ve already copied the recipe – times ten.  This recipe feeds six for decent portions.

The wonder of it – you cook spaghetti in a pot with your veggies and tomatoes and juices and herbs – you never drain it… and it makes its own yummy sauce.  So it’s not quite a soup, and not quite a sauce.  It couldn’t be easier.  And honestly- it really was delicious!  We thought the pasta would get all sticky but it was cooked perfectly. 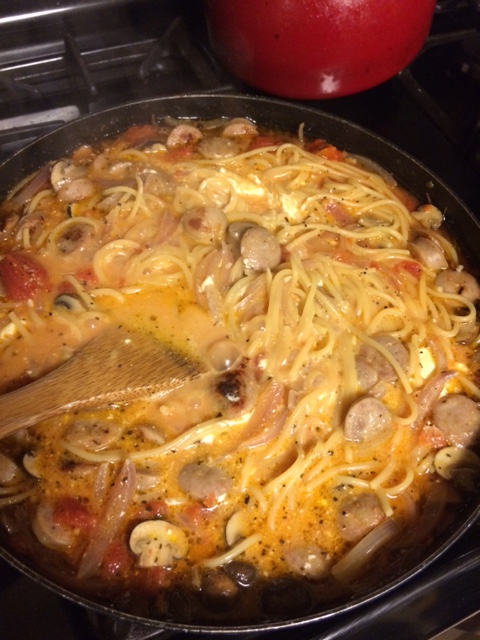 There are lots of different versions on the internet  – I liked the sounds of this one and tweaked it.  Thank you, apron strings blog!  I’ve copied the recipe from their blog.   (I couldn’t get basil at the store i went to so I added dry;  we had some sausage to use up so I fried that up and added it;  I added some white mushrooms;  at the end I added about 1/3 pack of cream cheese cut into pieces.  That made it – oh! so creamy and yummy.  Cooking time was literally as written – about ten minutes.  (Japan friends – I figured that the amount of pasta is about one smaller package – I added about 400 grams, and a bit of extra water!).

Cover pot and bring to a boil. Reduce to a low simmer and keep covered and cook for about 10 minutes, stirring every 2 minutes or so. Cook until almost all liquid has evaporated – I left about an inch of liquid in the bottom of the pot – but you can reduce as desired .

Season to taste with salt and pepper. Add basil leaves and stir pasta several times to distribute the liquid in the bottom of the pot evenly throughout the pasta as you are serving. Serve garnished with Parmesan cheese.

3 thoughts on “One Pot Pasta Wonder”