Last week I spent three days at the SIM headquarters in Charlotte, NC.  After many months of discussion, Asian Access has formed a strategic partnership with SIM USA.  Several friends have asked, “doesn’t that stand for Sudan Interior Mission?  Isn’t it strange to be partnering with a mission to Africa?”  It used to be called that… now it is simply SIM, with a tagline of “Serving in Missions.”  And I discovered that while it is a mission that began in Africa, “SIM has more than 1,600 active missionaries (from 40 countries) serving in more than 50 countries on five continents and 2 islands in the Indian Ocean.”   (I really love the chance to reconnect with my Zimbabwe roots!)

One highlight of our times of collaboration was a visit to SIM International, where we saw the archives of the mission and heard some of the history.  I loved hearing about the missionary saints who have gone before!  Although Asian Access is their first partnership, SIM has merged with numerous other missions over the years.  But it was first started in 1893 by three men who could not find an established mission to sanction their desire to take the gospel to the country now known as Nigeria.  While in the archives room, we saw twenty-six year old Walter Gowan’s original journal from that first year, written for his mother back in Canada, which was also the last year of his life. 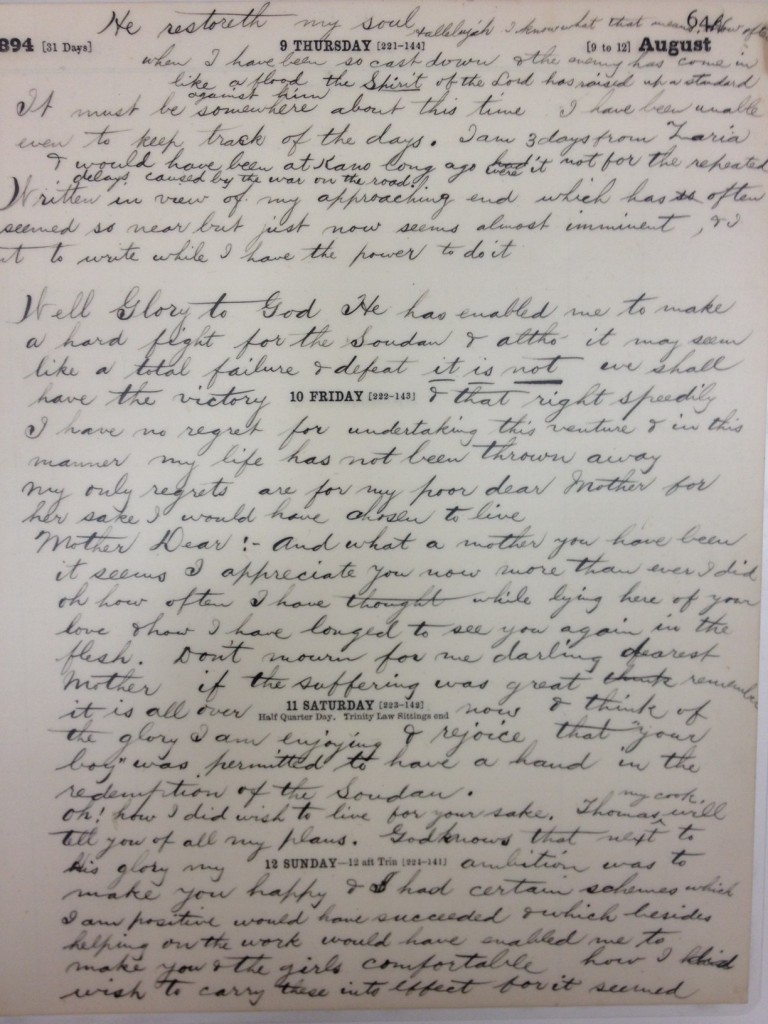 Here are some of the excerpts that caught my attention:

“‘He restoreth my soul.’ Hallelujah!  I know what that means; how often when I have been so cast down and the evening has come in like a flood the Spirit of the Lord has raised up a standard…Written in view of my approaching end which has often lately seemed so near but just now seems almost imminent, and I want to write while I have the power to do it.

…Well, glory to God.  He has enabled me to make a hard fight for the Soudan and although it may seem like a total failure and defeat is it not- we shall have the victory and that right speedily.  I have no regret for undertaking this venture and in this manner my life has not been thrown away…

Don’t mourn for me dearest mother if the suffering was great;  remember it is all over now and think of the glory I am enjoying and rejoice that ‘your boy’ was permitted to have a hand in the redemption of the Soudan…”

Separated from his coworkers, Walter was desperately sick with malaria, captured by an Emir raiding for slaves, and starving.  After being released, he tried to return to the coast, but he died alone in a town called Girku.

Thomas Kent also died during that first year.  Rowland Bingham, still very ill, returned to Canada and took Walter’s mom the few belongings left from her son.  Mrs. Gown said, “Well, Mr. Bingham, I would rather have had Walter go out to the Sudan and die there, all alone, than have him home today, disobeying his Lord.”

Hard words!  But a mom who knows what is ultimately important.  And through her son and two others, a mission that has played a strategic part in reaching Africa, and is now reaching across the world, was born.

I have read and re-read this page, and thought how thankful I am to be “permitted to have a hand in the redemption” of…  Japan.  The crowd of witnesses (Hebrews 12:1) that surround us encourages me so much to press on with the light pressures and perplexities that we experience, knowing that our obedience to Jesus is worth it all.

One thought on “One of the Witnesses”