Japan Self-Defense Forces have been doing a great job at getting supplies to the evacuation centers, but the guys and other volunteers are finding that it is the people who are staying in their homes in the devastated areas who are not receiving the supplies that are needed for daily sustenance.  CRASH Japan, the organization they are partnering with, seeks to find and bring relief to the places that are missed by the government help.  There are still many such communities out there…

Today Eric and the guys went to a town that is two miles inland from the coast, called Minami Sanriku.  This picture shows one of the nine homes that are remaining of thirty-eight that had been there before the tsunami.  My mind can’t fathom  a wave of water coming two miles in, capable of destroying a village. 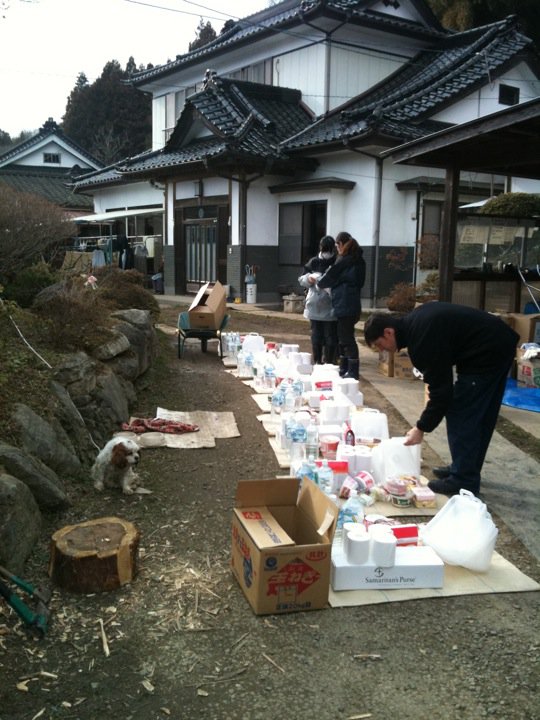 In true Japanese style, Eric said that there are nine mats set out to equally divide up any supplies that are brought in to help the nine families who remain in the town.  They welcomed the contributions brought in by the team.

Jonathan Wilson, a missionary here in japan who is the founder of CRASH, wrote this today:

But imagine four times the damage of Katrina and seven times the loss of life of 9/11 in a nation that is barely the size of California and with a struggling economy roughly a third the size of the US. What does that do to a country? What does that do to a region? Now consider a family or individual waiting for help to come. The greatest thing that we have to offer Japan is hope. Hope is not something that can be shipped in a container, or airlifted in. Our teams are operating from five regional bases throughout the entire area. One team near the area evacuated around the nuclear power station described the evacuation centers as well stocked and well run, but the people as terrified. Hope is packaged not in a box but in a person. Our focus is to send thousands of volunteers to stand beside the people of Japan until the job is done. To help them clear the rubble, rebuild their homes, and find hope for the future.

One thought on “Hope”