On Halloween night, we had a first (annual?) Halloween party for the children who are in Eric’s English classes in our community.  Our kids had been anticipating this day for a LONG time, eager to don the new costumes that friends from the U.S. had sent them:

When the rain came down heavier than ever, we wondered if anyone would show up — we were scheduled to meet at the park to go trick-or-treating!  But we had one hundred percent attendance — twenty children and quite a few parents showed up to party American-style (don’t you love the Pocohantas pigtails?) 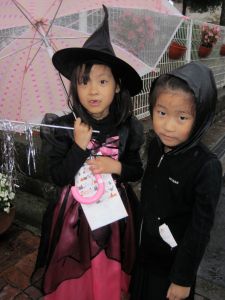 No one seemed to mind the rain- we just went around with umbrellas.

Trick-or-treating — and costumes, for the most part – are not a Japanese tradition.  Halloween is becoming more known in Japan, and different associations now are starting to have some form of Halloween parties, thus allowing Toys R Us Japan to make a bundle selling primarily witch costumes.  But we were able to create a trick-or-treat event by buying American candy and treats at Costco and delivering them ahead of time to five different families in our neighborhood, asking them to be available to pass them out when we came around that afternoon.  Even the passer-outers got into it – at our neighbors across the street, both the mom and daughter came out wearing costumes.  (So my big question is — is the daughter wearing a wig?  Or is that her hair?  I really don’t know). 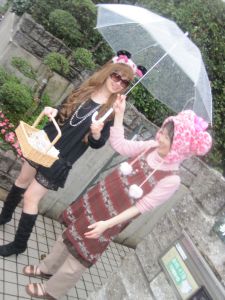 Then everyone came back to our home for games and Halloween refreshments.  We had had a great idea of bobbing for apples by using our antique coffee table– it is a round table carved out on the inside that had once been used for pounding rice cakes.  Eric lined it with a trash bag as well as a vinyl table cloth, then put the apples in it, and covered it back with the glass until we were ready to play.  It looked SO cool.

Just as Eric and the kids were leaving to gather at the park, however, I noticed a not-too-good thing — water was leaking out the bottom of the table!  There must have been a hole in our patriotic tablecloth.   We were still able to use it, however, thanks to the large tarp between the table and the carpet- for a rousing wet Halloween tradition that was a first for all of our Japanese guests.  (Later we had to dry the table through the night with the heater nearby).

We had all the kids in group try and eat a donut off the string (without hands, of course) and were surprised by the determination of even the youngest to get that donut no matter how long it took (zzzz)….

We had premade cupcakes and frosted green the faces of friendly witches, then gave each child supplies to create their own.

The witches didn’t last too long- they quickly got gobbled up, as did the rest of the snacks and hot apple cider that we served.

One of the things that we have been praying about recently is the need for Japanese ministry partners to come along side us in our ministry to this community.  At the end of the party, we felt so thankful for the partners God has given us… a new believer from our neighborhood, and three other not-yet-believer adults who live nearby who in many ways partner with us.  We loved hearing the laughter of the children AND adults; seeing them throw themselves into our Halloween festivities; and completely enjoy this chance to be in our home.   We very much felt the Lord’s affirmation as we experienced the joy of ministry on this wet “pagan” holiday.