One thing that is true with little kids – you never know what a day will hold!
Yesterday, I was off studying for the class I’ll be teaching in Tokyo next week, when Eric called my cell.

“Are they sick?  Did you go pick them up?”  It was 1 pm;  they should have been at the youchien/kindergarten until 2:30.

“No.  They ran away from school.  Together.  And snuck the whole way home.”

We live about a twelve minute walk from the school.  It’s not close.

After lunch, the two girls were playing together (not usual since they’re in different classes and grades but Annie’s teacher has been letting her go downstairs to Livvy’s class lately).  Annie had the idea to run away — “We didn’t like such a long day at school.”  They snuck out into the hallway;  switched into their outside shoes, down to the teacher’s room, and out the teacher’s private entrance that happened to be unlocked for some reason.  (“But even if it had been locked I knew how to open it!”  Great.)

“Together they went out to the street and began the walk home.  “We ran the whole time until Livvy had to stop and then I held her hand to help her go faster.”  They came to a bridge and then they saw him — a policeman!  “We knew he couldn’t see us so we snuck up over the bridge and ran home.”  (It actually was a construction worker directing traffic).  Thus they arrived in the entranceway of our house.  Much to Eric’s surprise – dismay – to say the least.

Eric walked the two girls (and Ian) back to the school.  The teachers were perhaps even more surprised than Eric – they hadn’t discovered them missing yet.  (And I’m guessing they paid for this later)… When I went back an hour later to pick them up, I was met with sincere apologies and bows.  They all felt really bad, and the head teacher said, “Please don’t punish Annie because she’s been through enough today.”  (Whatever!!)  They have since announced that Annie’s class is not allowed to leave the class after lunch, and Annie and Olivia know very clearly that they aren’t allowed to play together at school.  (We really want them to be bonding anyway with others in their class, rather than with each other).

Last night was a gloomy night in the Takamoto house.  Annie went to bed right after dinner, no dessert. (Our take:  Annie was the instigator;  Olivia was the accomplice).

We talked to our friend Megumi late last night who knows our children quite well — and  laughed hysterically, (though still acknowledging the worrisome parts of all of this) saying she has NEVER heard of any children figuring out how to run away from youchien and actually doing it! She decided that I have met my match in my sneaky ingenious little daughter and  thatperhaps they have watched too much Spy Kids?  (Only 1, 2, and 3-D…Are there more?)

We were/are concerned about what they did, but also are praying that God will change their hearts about going to school.  We know that the language is still a hard barrier, and that in particular making friends is hard for Annie because of the language.  Last week she and I were leaving the school and we saw two of her classmates walking away hand-in-hand.  She said, “Mommy, I wish I had a special friend here in Japan.”  We talked about her special friendship with Olivia, and she acknowledged that – but I knew what she meant.  Would you pray with us for our girls as they continue to adjust to the language and culture and relationships at youchien?  We are praying that God would provide a special friend for Annie — who might help keep her out of trouble even!

(Below- with two special friends  in Pennsylvania who they DID bond with): 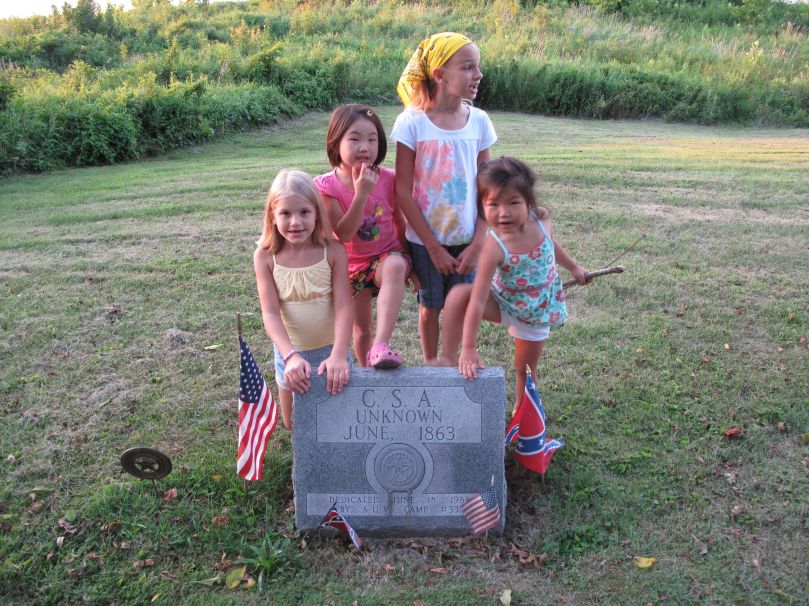 7 thoughts on “My Little Run-Aways”