Pretty much every day as we build relationships here we are hearing stories of the tsunami.  I am still taken by the many heroes who are here in our midst – who risked their own lives for another;  who cared for the needy;  who showed love in the midst of great danger.  I would like to at times share with you some of the heroes I am encountering — I hope in this small way to honor them.  You will never know their names;  and unless I have their permission you won’t even see their pictures – but it helps me to process these experiences as well as to help all of us not to forget. 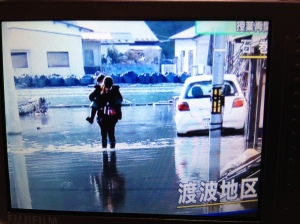 Y.’s sister heard on the news that most of the people who lived in Y’s small area had been killed.  With a very sad heart, she drove through the mountains for many hours to get to their home, assuming that her parents and sister had been killed and she was going to bring Y’s son home from the school evacuation center.  She was overjoyed to find them all alive, and had brought some much-needed supplies.  Y. ended up cooking on cinderblocks outside of their home, and took food around to the neighbors stuck in their homes.  She is still caring for the elderly man who lives on the second floor next door – he has left the first floor just the same as it was the day after the tsunami.   She took care of her three-year old neighbor’s son for awhile after the mother did not return home (previous story).   Her previous company was washed away, so she is tutoring children part-time after school to try and earn a small living.  We are going to have our two oldest go this Friday and see how that works out – they can use some extra help in Japanese!   Her son had a great time here building Legos with Owen- all of his Legos, and other toys had washed away.  But she said they were just so happy to be alive…  Her home has been condemned, and they will not be allowed to rebuild there, but it continues to be their home for now.  She is quite an amazing woman- I am looking forward to learning much from her!