The last few days have made me realize that from a vanity point of view, I need to change two things for life up here:  1) my hair style, and 2) my mascara.

For the hairstyle, this picture says it all:

It is windy here most of the time.  Longer side bangs and layers just don’t work.  Need to rethink that.

For the mascara – I have always been, like my mom, an easy cry-er.  If I walk by a wedding going on and don’t know anyone, I am prone to get a little teary-eyed.  The last few days I have had the deep privilege of being invited to share the pain of others, and the tears – and the mascara – have run.  Here are two special new friends that I would like to share with you.

Mr. K.and his wife are moving in with their sister, who lives next door to our temporary home here.  He had asked Eric if a volunteer team could help take out the cement wall that had been splintered by the earthquake yesterday.  On Friday, a team of volunteers from Tokyo came over with Eric and spent the morning take out the wall.  here is Eric working on it: 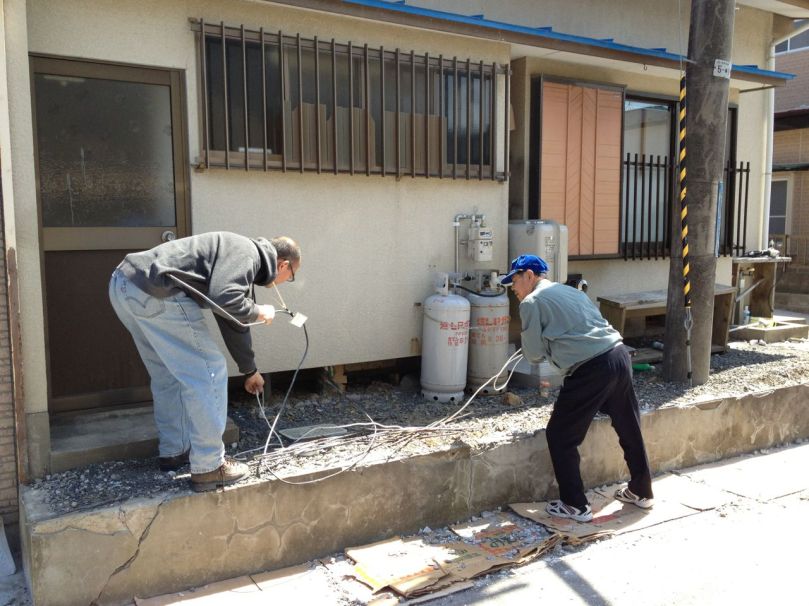 After we finished, his wife and sister brought out hot coffee and lots of treats.  When I showed up with Ian, they took him inside and played with him while I was outside talking to Mr. K.  He asked me if I’d like to see pictures of his home, and returned shortly after with a file of pre and post tsunami photos.  He and his wife had lived in Onagawa, a coastal town that was pretty completely ravaged by the tsunami.  He showed me photos of his lovely home before the tsunami, and then the approximate place where his home had stood after.  It was heart-breaking;  I could not help but cry.  It is one thing to see a photo of a town filled with wiped-away buildings;  it is another to have a dear, dear man point to a small point on that picture and realize that this destination had been their home in the world.  I was thankful that they had survived, but cannot imagine what that day and those following were like for them.

He so wanted us to see  and to believe how beautiful his town used to be.  I absolutely believed him!

He and his wife have been living in temporary housing for the past year, but at the end of this month will be moving in with his sister, next door to us.  Since Friday, they have been so so kind to us.  Today his wife went to city hall and came over with the one-year daily trash calendar for me, and then walked me to the different trash stations.  They are our first neighbor friends!  I love it that we can help them, but that they can help us as well.

The other areas came about an hour after this, when I was asked to be at a lunch being sponsored by Ssamaritan’s Purse (SP).  They had asked seven or eight home owners where they have been working to come to Be One and meet some of us who are now living in the area.  When had a fun time of making sushi around small tables and sharing together.  Before lunch, I sat with a very beautiful woman, Mrs. T., who owns a massage parlor in one of the hard-hit areas.  SP has finished fixing up her home, but she later shared that she cannot move back yet.  She said that she and her daughter had been home when the tsunami came, and that the memories of the bodies floating by still haunt them.  We were thankful though for the friendships that developed around the table with her — Eric and I need to head over there sometime soon and support her massage business!

During and after lunch, I sat with several other ladies.  One shared that she had her husband spent the five days after the tsunami living in their little car with their toy poodle in the car as well.  They didn’t have food, but managed to survival somehow with what they could.

Mrs. K. was also at this table.  She had come to Japan from Korea twelve years ago, but speaks great Japanese.  She has a japanese husband.  She started to share with me how she frequently has heart palpitations when she gets in the bath. Last week, she had immense pain and thought she was having a heart attack.  She called 911 and was taken by ambulance to the hospital.  The doctor said she was physically completely fine.  She had an MRI done and it came out normal.  She said, “I guess the problems are just in my mind.”

What was hardest for her after the tsunami was her cat. She thought her cat had been washed away in the tsunami, and was really sad.  But then a month or so later her husband saw the cat nearby, but when he called the cat’s name, the cat ran away.  She is haunted by this.  “Why didn’t he come home to us?  Was it so terrible that he lost his mind?  Does he blame us for what happened to him?”

There were no easy answers.  After talking for awhile, we asked if we could pray for her.  I opened my mouth to pray, and the only thing that came out was – sobs.  I was filled with such grief and sadness for Mrs. K.  My Japanese partner ended up praying, and it was incredibly healing for all of us.

Mrs. K and I have talked on the phone several times since then.  She called me on Sunday afternoon to tell me that she had found a church near her weekend job in Sendai that was “like us.” She was quite excited about it.  I pray that she will continue finding healing from the pain she has experienced, and that we will continue to be friends.

I know i need to find some smear-proof mascara.

It’s a privilege to be here.