Unforgettable – unbelievable – are the huge areas of piled trash all over the Tohoku region.  I read that there are 28 years worth of garbage from the one day of tsunami and earthquake.  This number is believable when you see the amounts of piles both collected and still uncollected. 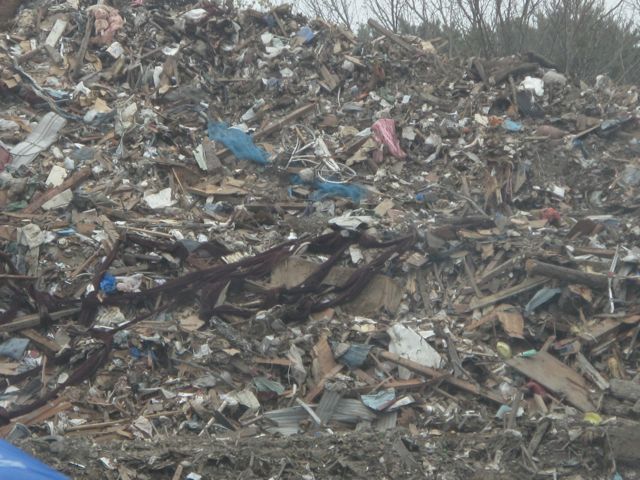 Two of the unfortunate results of this amount of piled garbage and the summer heat are the smell, and the flies.   Already Ishinomaki has quite a reputation in this area.  Because of the large fish markets and factories by the coast that got wiped out by the tsunami, there are still rotting fish buried across the city…. We had to work hard to keep the flies off of the food we were barbequing.  Eric last time took up about 120 cans of insect spray and they were gone quickly.  It threatens to be a growing problem…

The sad, sad things that we find clearing out rubble….

Laundry still hung out to dry since 3/11.

This find gave us a smile…. 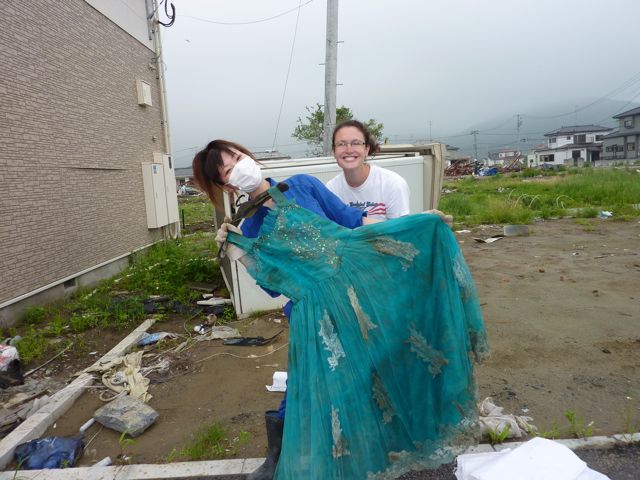 The areas of Ishinomaki where we are working were hit by the tsunami coming in and for the most part destroying the first floor of most of the homes.  For some houses, this meant totally destroying their home.  For others, they are still living on the second floor while trying to restore somehow their first floor.  Joseph below is standing in front of a house with an obvious water line. 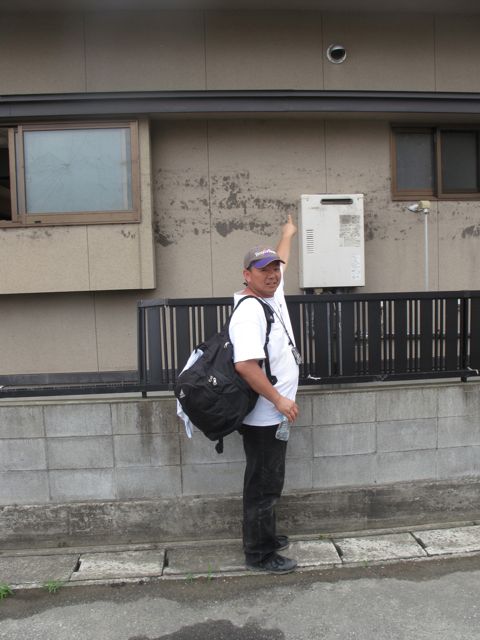 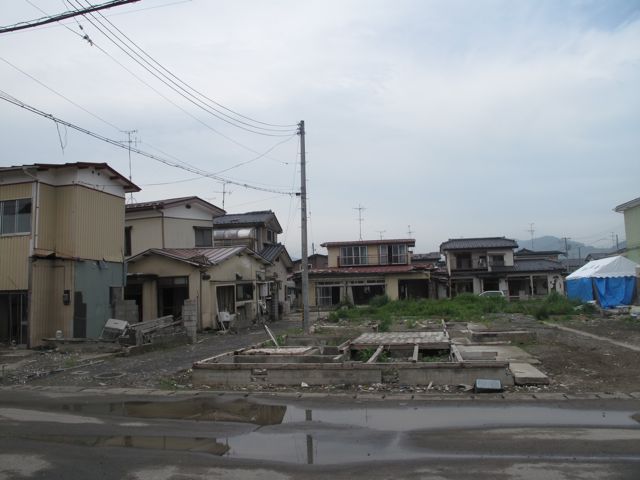 The craziest things are in the craziest places.  So unbelievable.  The front of a car in the kitchen of a small apartment.

Now some happier images…. These girls are awesome!  It was great to work as a team to do jobs that could never be done  by just a few people.

This was a short-term team from San Diego who had been planning to come to Japan with Asian Access before the tsunami – and kept the plan.  They are a great group of workers, willing to do anything.

The Hawaii team that went to do counseling also did a lot of great manual labor too.  Go Shirley go!  Cleaning gutters…. 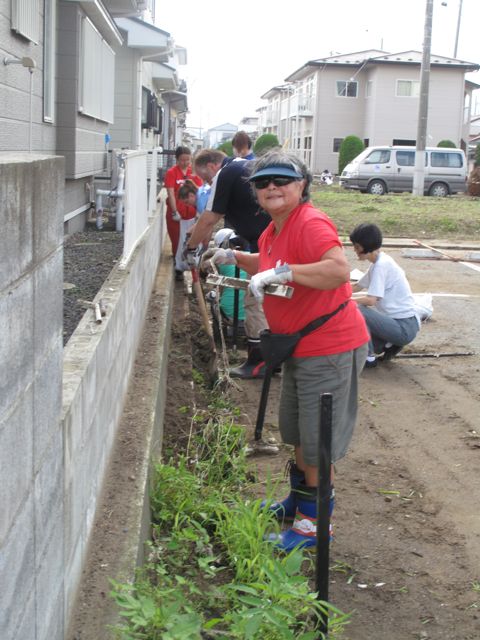 That afternoon after an almost-full day of work we went to an area of high rises near the Be One base and hung out with the kids and the moms.  These girls were so fun!  Jan from the Hawaii team brought nail polish and sticker decorations.  The moms all loved getting manicures;  but the girls below aren’t allowed to have nailpolish at school.  So we did a few pedis. 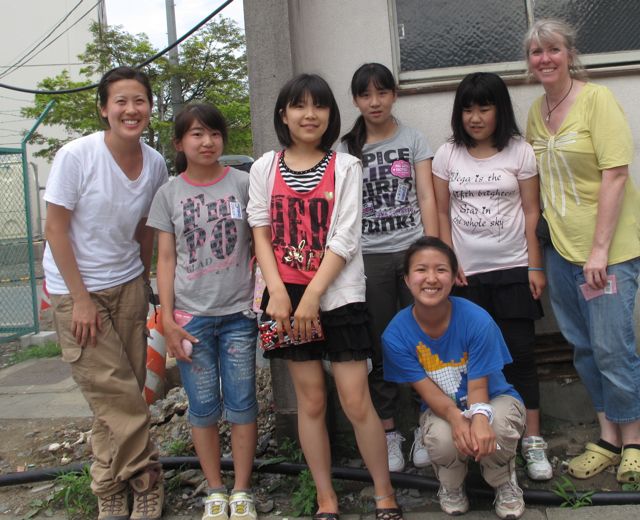 On Tuesday we did a barbeque where we had cleaned up the day before.  We had been told by a community leader to prepare for 100 to 150 – I am fairly sure that we gave away at least 300 meals, though its hard to say.  I wished I could have stayed and continued talking with some of our new friends!  Since that evening, I have been emailing two of the girls.

Sharon had a patient from Hawaii make about 75 children’s dresses and outfits for her to bring.  It was so fun to give them away!  Mrs. Baba, below, got these for her granddaughter.  The first day we had gone around the neighborhood to tell people about the bbq and see if they needed work down.  She reluctantly shared the need to take apart two rooms in her first floor that had been tsunami-hit.  A large crew went in the day of the bbq while we were preparing and did an amazing job.  She was so thankful!  As she talked with our friend Yumiko, she shared that her husband left her and their three boys six years ago.  She said what was most difficult after the tsunami was that he never called to see if they were alright.  She cried, and Yumiko prayed for her.  She had found people who really care for her. 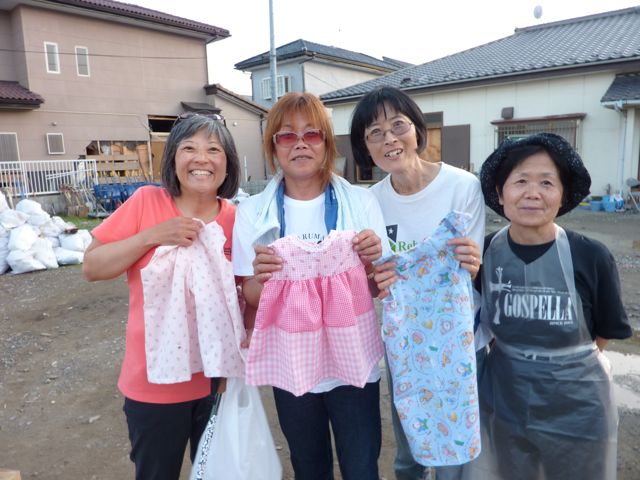 One of my favorite images from Ishinomaki is a building.  I don’t think there is anything special or magical about this building, but it is what is represents.  It has been dubbed the “Be One House.”  It is being rented to the Be One group because they had helped the family living there (and then the family did not want to return to this neighborhood).  Little by little it is being fixed up so that at some point a family or others will able to move in more permanently.

But it represents the hearts of lots of Christians – Japanese, Australian, North American… who have been part of a greater vision of loving on the people of Ishinomaki.  A lot of teams and individuals have been part of making a difference in these communities.  People who live around the Be One house are changing.  The next door neighbor is bringing her friend to the Sunday morning worship services.  Neighbors are bringing food to the volunteers and participating in the clean-up process.  There is less of a “victim” mentality and more of a sense of cooperation.  God is at work!

As we ministered out of this home and dispersed across different neighborhoods, I kept thinking of one of my favorite Bible images:  “And the Word became flesh, and moved into the neighborhood “(John 1:14).  What a great privilege to follow the example of Jesus, and be part of these neighborhoods that have seen such trauma and pain.  We are carrying Hope, and can offer it by serving, cleaning, loving, cooking, listening, going.  So thankful for even the few days that I could be part of what God is doing in a desperately needy city. 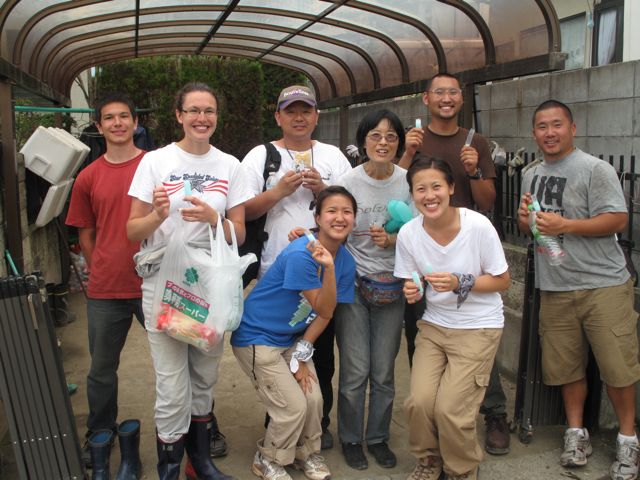 2 thoughts on “Images from Ishinomaki”